What is a clown?

Clowns are in the news

They are emerging from the backs of circus tents, from caravans, from performance schools in France, from workshops and colleges and they are starting to make their presence known. They are organising themselves and going to battle, they are entertaining children in refugee camps across the world, (Clowns Without Borders) they are protesting (Clandestine Insurgent Rebel Clown Army CIRCA) they are on TV and film, they are on the street, when you start to look they are everywhere. But where did they come from?

Before starting to think about the evolution of the clown some fundamental questions present themselves. The word clown conjures up a variety of images for people, some funny, some grotesque and some downright scary, there is even a phobia associated with clowns, a condition called coulrophobia.

What is a clown?

For me the best answer is that, for most professional clowns, it is a way of life. Technically it is a performance state, but it is more than this, for many clowns it is a philosophy, a way of seeing the world…for a performer it is to exist in a world of infinite possibility.

How does a clown differ from an actor?

The clown is distinguished from the actor by his ability to play with the audience and to create a sense of complicite with them. There is always something otherworldly about clowns. This may be expressed in the way that they look different from the norm (through make up, costume, the use of the red nose) but the most striking feature of their otherworldliness is their attitude to life as expressed through their performance. Whilst the clown often fails to achieve their initial goal, this failure is actually a triumph, framed as it is by their unquenchable optimism and the simplicity of their approach to life. Clowns can also be distinguished by their physical skill, this is not to say that actors do not posses physical skill but rather that clowns possess and draw on a wider range of skills, which may include circus skills such as juggling or balance, mime, great physical control and comic timing. 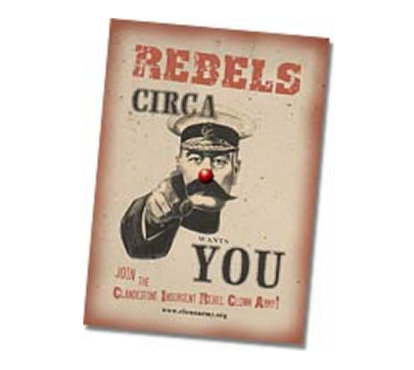