Nola Rae was born in Australia, in 1949 and migrated to London with her family in 1963. Originally hoping to become a dancer, at 16 she began training at the Royal Ballet School in London and then danced professionally at Malmö Stadsteater and Tivoli Gardens Pantomime Theatre in Copenhagen. However, realising that she might not succeed in ballet, she turned to mime and studied with Marcel Marceau in Paris.

She was a founder member of the French-based International Research Troupe Kiss, co-founded Friends Roadshow with Jango Edwards and was a member of the Bristol Old Vic Company. In 1974, she founded the London Mime Theatre with Matthew Ridout, with whom she has worked ever since. Nola and Joseph Seelig were the original instigators of the London International Mime Festival, which is held in January each year, and has been running since 1977.

Rae premiered her first solo show at Le Festival du Monde in Nancy in 1975. Since then she has created 12 full-length shows and toured the world. She combines mime, clowning, puppetry and dance and has performed in over 60 countries. A great lover of the works of Shakespeare she created Shakespeare the Works with John Mowat, where four of the Bard’s tragedies were turned into comedies, and included a version of Hamlet for two hands. She later tackled A Midsummer Night’s Dream, where the fairies were represented by puppet salad vegetables.

In 1990, Rae radically changed her style and began to present full length comic dramas where one wordless character is developed over an evening. One example is Elizabeth’s Last Stand, directed by Simon McBurney. It explores the loneliness of an old woman when she develops delusions of grandeur and tries to recreate the court of Elizabeth I of England in her living room. This was followed in 1993 by a two-woman show with the contemporary dancer Sally Owen. Directed by Carlos Trafic, from Argentina, And the Ship Sailed On explored the clash of two women of different cultures who are forced to share a small cabin on a nightmarish voyage of immigration. In Mozart Preposteroso Rae presents a clown’s fantasy on the life of a musical phenomenon. Exit Napoleon Pursued by Rabbits was inspired in part by Chaplin’s The Great Dictator.It deals with dangerous charisma and how to get it, following the transformation of a hobo into Napoleon and then Hitler. Home Made Shakespeare with the Swedish actor Lasse Äkerlund has her using her voice on stage for the first time. She also gives workshops, lecture demonstrations and master classes.

Rae is also in demand as a director, her speciality being subverting tragedies, by turning them into clown plays. She began with Lorca’s The House of Bernarda Alba performed by the Swedish all-women clown group Teater Manjaña. They won the Swedish Humour prize for the funniest show of 1996.. Her directing work in Norway includes Doña Quixote by Coby Omvlee and Ibsen’s The Wild Duck for the Oslo Nye Teater. She also directed The Three Musketeers (the clown version) for Les Anges Perdus in Vienna 2006. Over the years, Rae has made numerous television appearances. They include a BBC Playhouse Special After You Hugo, where she played a French dancer who impersonates the Russian ballerina Pavlova in variety theatre.

She has been the subject of two documentaries : BBC Arena and Meridian Television’s The Pier. Rae received a Total Theatre Lifetime Achievement Award in 1999, the Charlie Rivel Award for Clowning from the Festival of Amandola; and was inducted into the International Clown Hall of Fame in the United States in 2000. In 2008, Rae was awarded an MBE by the Queen in her New Year’s Honours List for services to drama and to mime. 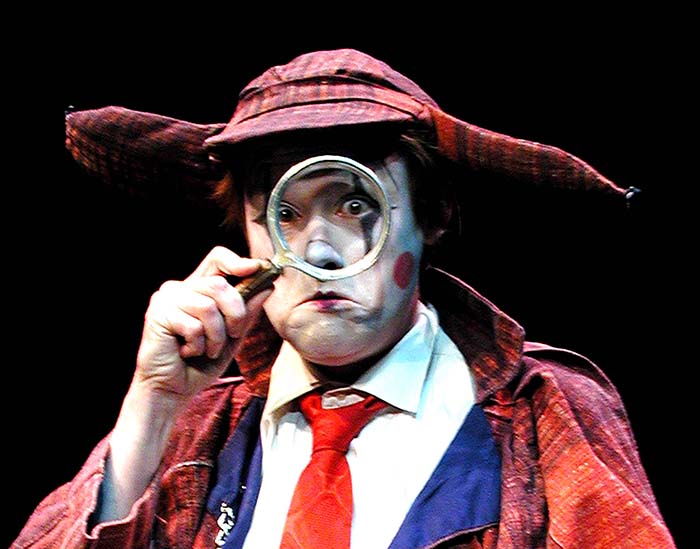 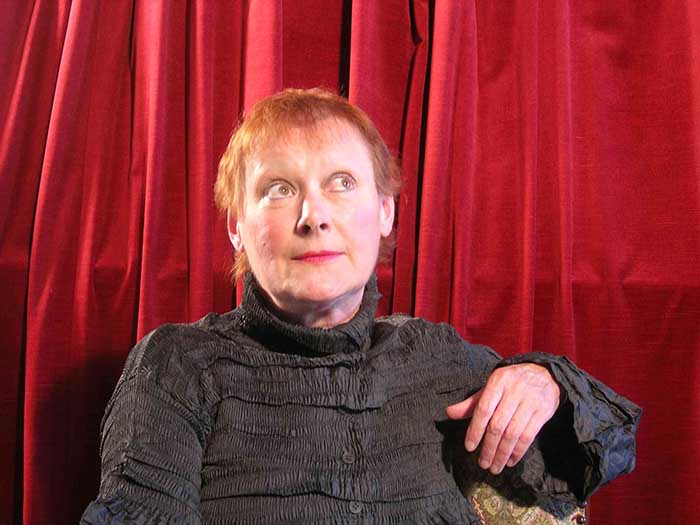 The face of Lucille Ball was immortalised as Lucy RIcardo on The “I Love Lucy” Show and is said to have been seen by more people worldwide than any other. Known as Lucy to generations of Tv viewers who delighted at her rubber face antics and comic scrapes she was also a shrewd businesswoman, serious actress and Broadway star.

She started her career as the Chesterfield Cigarette girl, in 1933 she was cast in a Busby Berkeley/Eddie Cantor movie “Roman Scandals” During the filming she volunteered to take a pie in the face and Berkeley was quoted as saying “Get that girl’s name, she’s the one who will make it!” In her career she worked with many comic greats including the Marx Bros, Laurel and Hardy and Buster Keaton, who taught her how to handle comic props.

In 1940 she met and married bandleader Desi Arnaz and they developed a clown routine which they then  proved by touring widely to theatres  before selling it to TV forming their production company Desilu in 1951. Within six months the show was rated number one, winning many awards including 5 emmys. Her writers were familiar with the art of clowning and incorporated clown routines into her scripts, including a famous mirror sketch with Harpo Marx. She was an example of woman of beauty who could also clown thus refuting the stale argument that beautiful women find it difficult to be funny. She was featured in TIme Magazine in 1952 under the byline “a Clown with Glamour”  Says it all really! 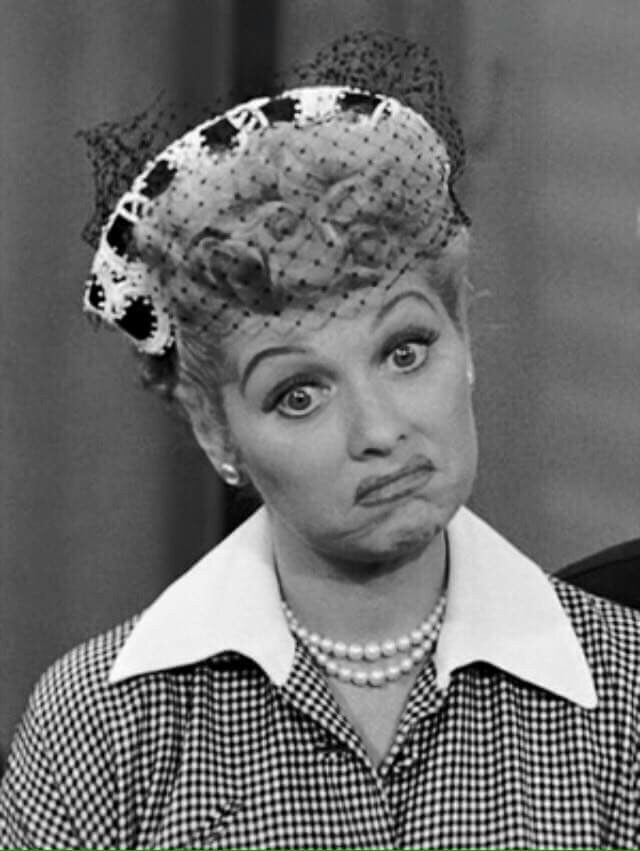 One of the great clowns was Jacques Tati. He started life training to be a picture framer in England where he became an enthusiast of rugby football and the music hall. In his early career he devised comic mimes caricaturing sporting types which became the basis for a successful music-hall act, and some short films. 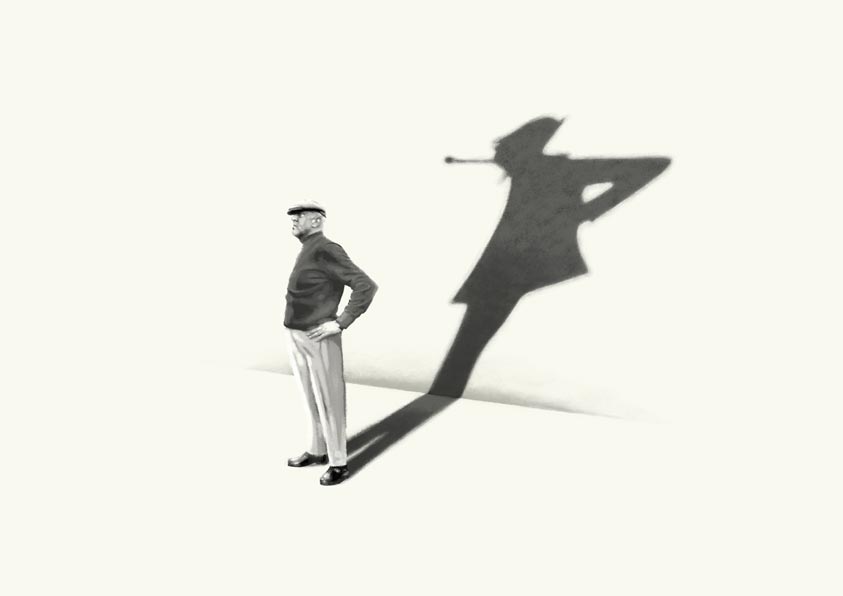 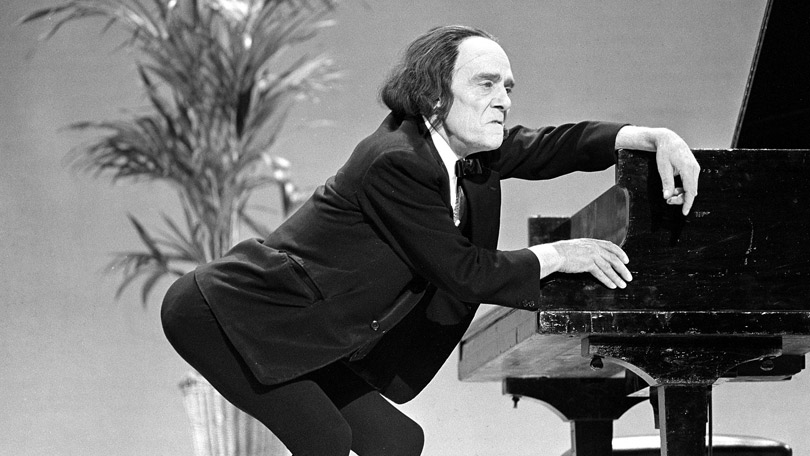 Max was born into a music hall family, his father was Jack Lorimer eccentric dancer and his mother a singer. He made his debut in the music hall as the Boy wIth the Obedient Feet.  He grew up to become Max Wall and his Independent Legs. He was in a double act with Mary Lawson before joining the RAF during the war. Invalided out he created the outrageous Professor Wallofski with a bald wig, tights and a famously eccentric walk routine.

In the 1960’s he became an actor playing Malvolio, Archie RIce and Pere Ubu among others, his lugubriously mobile face made him most suitable for the characters of Becket, whose attention he drew. He had some success appearing in popular British TV programs such as Coronation Street, Crossroads and Minder. Films included Chitty Chitty Bang Bang (1968) and Jaberwocky (1977).  In 1975 he was given a Variety Club award. His personal life had ups and downs and for a while he fell from favour because of a messy divorce. Among other ventures in 1972 he toured with rock group Mott the Hoople, gathering a fresh audience for his genius. In the 80’s he toured with a one man show ‘Aspects of Max Wall’. His last appearance was in an award winning short film called A Fear of Silence, his dialogue consisted of two words ‘Yes’ and ‘No’. He died after a fall in 1990.

Last night you made your final pratfall

as I read in the newspapers today

that you slipped and fell on your way

out of Simpsons in the Strand.

Was no one there to give you a hand

to save you from your clownish fate?

A slap-up dinner followed by a broken pate.

the son of his parents both worked on the stage

and Max joined them at an early age

His father was a dancer who wore a skirt

his mother a singer and with Max in a shirt

the act was complete.

He was billed as ‘the boy with the obedient feet’

Then at the age of 14 Max began his climb

by appearing in MOTHER GOOSE, a pantomime,

everyone said that Max’ll go far

and so he did, touring Europe and the States

with his independent legs and his doleful face

his career was assured but then came disgrace!

Blackballed by variety, the press and his wife

poor Max was condemned to a bedsit life

but then in the sixties he appeared to

have found work in the empty space

of the modern theatre.

(The lines on his face being prominent factor

in his appeal as a character actor)

Whilst appearing in Panto (Mother Goose in Crewe)

He was asked to give an interview

which was read by a rock band who

were going on tour that very day and were looking

for a support act that didn’t need a PA

And so Max Wall went on tour with Mott the Hoople.

Max won them over he was back on the stage

playing to new audience he was all the rage

with Professor Wallofski and his comical feet.

He appeared on TV in Coronation Street.

While the old comics were fading with the music hall

he was playing to full houses with

So farewell then dear old Max

But that’s the essential story of my hero Max. 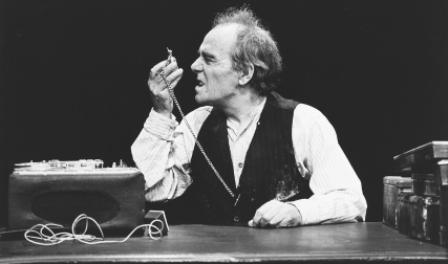