Karl Valentin was born in Bavaria to a middle class family, he came to be known as the “Charlie Chaplin’ of Germany, Valentin was a film maker,, cabaret artist, and clown. His work is said to have influenced Bertholt Brecht and Samuel Beckett.

He began performing in cabarets in the Munich area, developing a reputation for writing and performing short skits and sketches. He also made short films but it was as a stage cabaret performer that he made a reputation as one of the lead comics of the Weimar Republic.

HIs style was to produce sketches that were often Dadaist in nature, his art centring mainly around wordplay and based on simple misunderstandings. HIs humour is often referred to as ‘gallows humour’.

In 1923 he appeared in a film written by  Brecht who had spent many hours watching his cabaret act around Munich and compared him to Charlie Chaplin. The film was called “Mysteries of a Barbershop”.  It is considered to be one of the 100 most important films in the history of German film making.

Brecht wrote of him “But the man he learnt most from was the clown Valentin, who performed in a beer hall. He did short sketches in which he played refractory employees, orchestra musicians or photographers who hated their employer and made him look ridiculous.  The employer was played by  Liesl Karlstadt who padded herself out and spoke in a deep bass voice.” Valentin is credited with giving Brecht the idea of applying white make up to his actors in his play Edward 11, which subsequently gave rise to Brechts conception of the Epic Theatre style.

There is a museum in Munich dedicated to the work of Karl Valentin and a statue was raised in the Viktualienmarkt in the city. 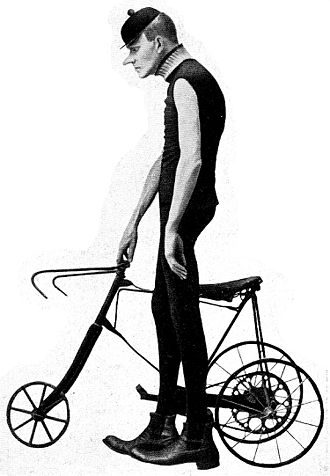