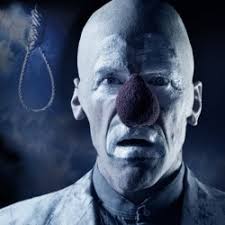 Think clowns by Samuel Beckett, think films by Georges Méliés, german expressionism, the classical mimes such as Debareau and Marceau then think again about what a clown is and what the word clown means to you. It had all the elements of the classic clown show, all the props, the eternal suitcase, a symbol of a clown’s endless journey or just a suitcase with his props, it had musical instrument at times in a study somewhat reminiscent of Grock.

The music at the beginning reminded me of Max Wall, as our clown is propelled backwards onto the stage dismissed by a noisy crowd he decides to end it all. We had butterflies, stage butterflies, big beautiful untamed butterflies and vicious iron butterflies. We had dreams and death and bums and puppets and the most exquisite film projections and we had a big red nose, white face and a tutu. We had it all, whilst sat behind a fourth wall for a change. Those who knew the performer in his other guise might have expected some audience interference but our clown was too engaged in his own life to trifle with the audience. After the show I talked to some punters outside the venue whose only experience with clown had been of the traditional circus variety, and they hadn’t been sure what to expect but to a man they enthused about it. They all thought the show was wonderful and hadn’t realised that a clown show could be so dark, so real and so rich in symbolism.

And that is what is truly terrific about this piece, showing us as it does the other clown, the clown with a soul who reflects back at us the trials and despair of life as well as the joy to be found in each new moment of discovery. That true clowning is not all about laughs. In fact there were very few laughs to be had which was a welcome relief. There didn’t need to be laughs. I counted the minutes to the first genuine laugh and it was about 10 minutes, normally clowns try to get a laugh within the first 30 seconds but not ericthefred. No, he took his time, standing for a long while just holding his suitcase, holding the moment, allowing us the luxury and relief of just looking at him, appreciating the happenstance that might have brought him to this particular moment. This show had many such beautiful moments but the great trick came towards the end, revealed slowly and then in an instant bringing joy to the audience with its audacity and cleverness and then with that joyous moment passed we are rushing headlong to the end, the ultimate collapse and it is over. The spirit of the clown has left the building. And we are left to applaud the performer as he steps outside the cloth and his family of backstage puppeteers and prop wranglers and on this night, the composer. Rightly so because the music was an integral part of this elegantly conceived show, beautifully paced, placed and performed like the show itself, a masterclass in holding the moment and being unafraid of the silence. It deserved a much bigger audience but those that were there watched in delight as the slow story began its beat and captured our hearts. Excellent technical delivery from both film and live performance combined to allow this dreamlike piece to claim its place among the great clown shows. The show shouts quality and the performer is in a class of his own.

Expressive mime and exquisite stagecraft hark back to an older art form whilst cleverly allowing modern technology into the secret and fantastic world of this dark clown. Ericthefred was played by Chris Lynam, still, on his day, one of the most exciting and riveting performers of this genre, the clown.