Laughing in the Face of Danger 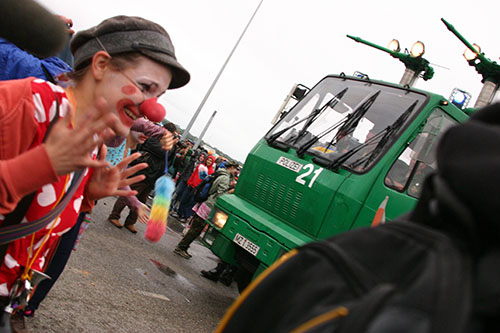 Laughing in the Face of Danger.

A new clown is emerging, or a modern version of an old clown, the Activist Clown or the protest clown.  The conventional view of the clown is that of the red nosed circus buffoon but there is another less well known role developing for the 21st century clown. It is the face of the new protest movement, it is the face of a doctor in a children’s hospital and it is the face of an individual bringing laughter and hope to a seriously unfunny situation, such as a refugee camp in Lebanon or a migrant camp in Calais. This is not a new role for the clown, indeed their original function was to act as a shaman, as a truthteller and as a mirror to society but over the years this function has been forgotten and the clown relegated to that of a mere entertainer in the circus, running children’s parties and as scary movie characters. However there is a rapidly growing movement to use the skills and features of a clown to protest and effect change around the world. This is the story of the new clown, clowns that put themselves in ha-ha harms way. Step forward Activist Clown! 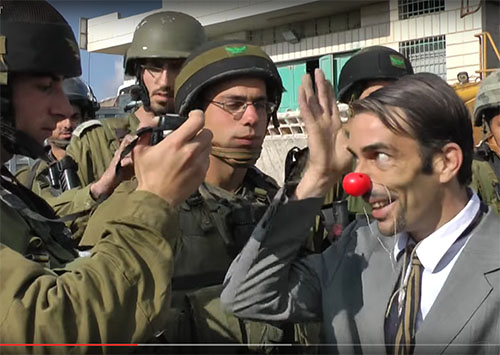 There are numerous organisations that organise and send clowns to war torn regions, to refugee camps, to hospitals around the world. One of the largest of these is Clowns Without Borders. They have branches in several countries including the US, the UK and Ireland. Founded in 1995 they have been working successfully in the following countries Uganda, Palestine, Somalia, Rwanda, Jordan India: November 2015 Nepal: September 2015 Lebanon: December 2014 Kenya: June 2014 Philippines: Feb 2014 Zimbabwe: Sept 2013 and indeed the Irish branch have just documented their work in Tripoli and Beirut

It is a huge organisation and has a massive impact on all the people that it has helped over the years helping to alleviate those affected by disaster, terrorism, migration, and poverty.

Clowns are also beginning to challenge social issues in their own countries, here we have a group of clowns in North Carolina, US protesting against the rise of the white supremacist organisation, the Klu Klux Klan. https://www.youtube.com/watch?v=ThGR-7DbLEg

Closer to home in Europe, a group of clowns banded together to combat racism and racist groups in Finland.http://modernliberals.com/in-finland-clowns-are-combatting-racism-with-hugs 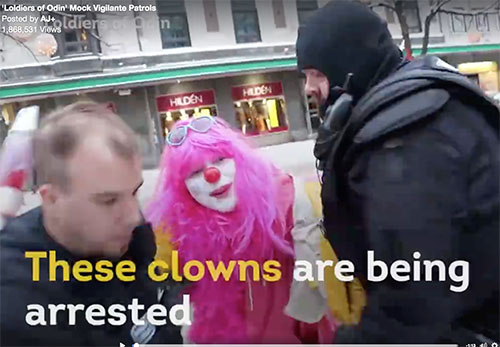 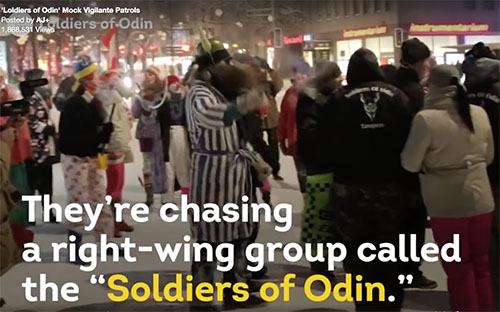 Last year a group of Spanish clowns staged a pro Palestinian naked protest (with red noses) The activists behind the photos are artists who performed on the streets of Bethlehem, Ramallah and East Jerusalem over a week. They explained the photos by saying, “When you stand before this shameful fence, all of humanity is naked. The decision to be photographed as naked clowns was meant to remind us that all of humanity has lost its respect by allowing such barriers to exist. http://www.ynetnews.com/articles/0,7340,L-4701371,00.html 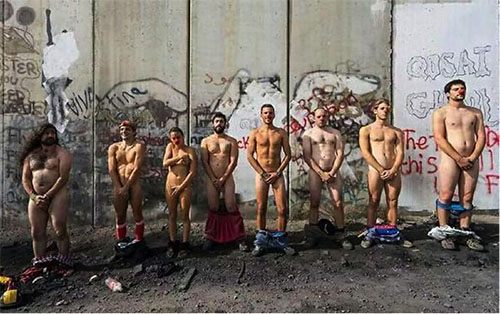 Palestinian Clown on the line

Then there are individual clowns who are bravely putting themselves literally in the firing line. There is a clip of a solitary clown standing between Israeli soldiers and Gaza protesters trying to get the soldiers to shake hands with the protesters,

He is working on the edge of danger without a doubt as he mocks the soldiers, some of whom are plainly not impressed.

The full clip can be seen here https://www.youtube.com/watch?v=cgqNdf-VOCg or under clips elsewhere on this site 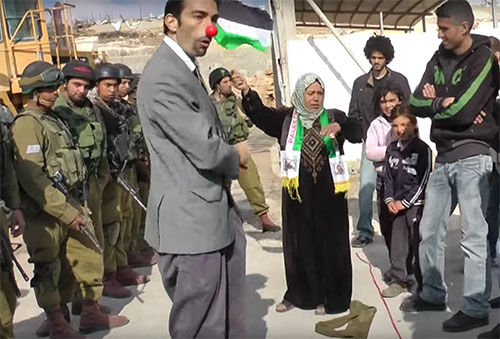 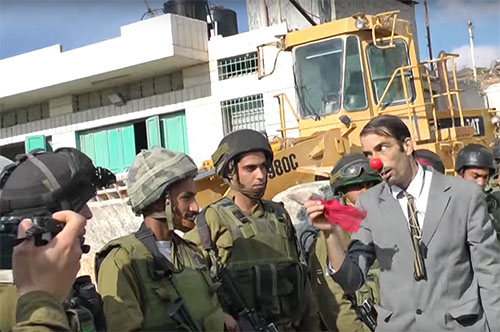